Chubarov … the Exiled Leader for the Crimean Tatars 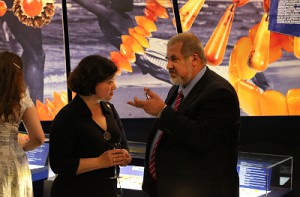 Refat Chubarov in Conversation with the Lithuanian Ambassador to Ukraine.

The Lithuanian Embassy to Ukraine invites to the opening of an amber exhibition at a museum in downtown Kiev and large parts of Kiev’s diplomatic circles has come to view the splendor.

Refat Chubarov moves among the lighted display cases with jewelry and art. Soon he catches the other guests’ curiosity, and I can see them lifting their eyes from the precious amber objects.

The powerful and bearded man with a deep, penetrating gaze is not yet as well known as his predecessor on the post as the leader of the Crimean Tatars, Mustafa Dzhemilev. He was Speaker of the Crimean Parliament Medzjlis 1991-2013. But the 57-year-old Chubarov and his name is greeted by respect. Many come forward to exchange a few words with him. For me as a foreign journalist, who is a link to the public in Sweden, he has a clear message:

– The West must learn and take in the truth about the annexation of Crimea.

He admits that a large percentage of Crimea’s 2.3 million inhabitants were disappointed over their situation. Many accused Ukraine’s previous governments. Nearly 60 percent on the Crimean peninsula has been the Russian-speaking. Most of them feel a closeness to Russia. It is the opposite for the Crimean Tatars, which have constituted about 12 percent of the population of the peninsula.

Despite Crimea’s attractiveness for both Ukrainian and Russian tourists and good conditions for farming many young people were out of work and had little opportunity to influence their lives. But now when people see how it is after the Russian takeover, they are no longer as enthusiastic, according to Chubarov.

Civil servants in the Crimea have certainly had their wages increased, in many cases more than doubled. At the same time, prices have soared since the Russian ruble was introduced. The range of goods has been limited.

Some Crimean Tatars, like Refat Chubarov, fled across the new frontier to Ukraine, but most Tatars stay. Several of his former close colleagues are in the custody of the new authorities.

Tatars consider themselves indigenous people of Crimea. The Soviet deportation of Tatars in 1944 changed the demographics. Only after the fall of Soviet communist empire some of those deported could to return to Crimea. By then the Russians, not least the military and their families, had taken over.

In 2014 Moscow took a new Kremlin grip on the peninsula. For many, it means a life with a highly uncertain future.

– People are under surveillance and forced to swear their unconditional support to the new regime. In reality it means that Russia do not care about the 2.3 million people in the Crimea, simply because Russia’s regime does not even care about their 152 million citizens, not to mention that the very basic freedom people are deprived of with a force of incrimination by fear. Russia wants to have Crimea as a military base to control the NATO countries to the south of the Black Sea, Chubarov explains.

The rehabilitation is evident. It has, according to information made extensive arms shipments to Crimea. The Ukrainian troops in the Crimea soon after the Russian intervention in March 2014 were given an ultimatum: Stop (and get your salary raised). Most of the soldiers chose to stay under the new, Russian, rule. The loyalty is thus somewhat purchased.

The elections took place very rapidly under Russian influence. Almost 97 percent of those who voted wanted to be incorporated in the Russian Federation. Neither the election results, which were conducted at gun point under surveillance of unidentified paramilitary force (the so-called “green men”), nor the new borders are accepted internationally.

Since the takeover, the local economy on the Crimea is destroyed. The tourism industry that usually thrive during the summer months is in shambles. The Ukrainians don’t come. Only the military, police and others within the administration can prosper. For many Crimean inhabitants the annexation means that families have been shattered. 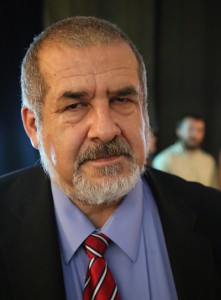 Refat Chubarov is the Leader for the Crimean Tatars, in exile since the Russian annexation of the Crimea in 2014.

– People do not learn from history. Mistakes are repeated. I hope that the West will care more about the Crimea. There is a risk that the situation will explode, says Chubarov.

Russia, according to Chubarov, misguides the outside, not least through the television channel RT, Russia Today. He hopes that most people can see through the lies.

Both Russia and Ukraine are affected by what is described as Putin’s imperialistic regime. Some interpreters believe that what is happening in Ukraine is nothing but a maneuver to deceive the Russian population.

The outside world has imposed economic sanctions against Russia for the behavior in Ukraine. Now, the Kremlin blame the US, NATO and the West. Most countries, especially those in the immediate environment are concerned. Although a large proportion of the population in eastern Ukraine and Crimea would rather be incorporated into Russia than to be a part of Ukraine it is little talk of political solutions. There are locked positions and Russia is increasingly isolated.

I ask Chubarov about Russia’s hosting of the World Championship in football in 2016. Should the event take place as planned, given the present situation?

– No, absolutely not. The country’s leaders must be tried in highest court in two cases. The first concerns the murder of Alexander Litvinenko in London and the second concerns the downing of MH17 over Ukraine, Chubarov says emphatically.

– The Western world needs to hear our strong message. Do not let yourselves be fooled. The Ukrainian people will never accept the annexation of the Crimea. If it is not resolved in some way, people will resist, says Refat Chubarov in Ukrainian.

I get the answer translated by my local helper, researcher, translator and friend Vitaly and I nod. That’s how it used to be. The pattern is known. Someone’s self-esteem has been clinched, and this one feels belittled and wants to get back. It affects someone who, in turn, will feel unfairly treated and oppressed.

With the knowledge of previous destructive events in history, the world should work to reduce tensions. Who will win on the continuing warfare in eastern Ukraine, and a potentially violent conflict over Crimea? In the short term, only the arms industry.

Related article (Swedish): Story about Ukrainian Journalism and War memorials in Kiev May 8-9 2015